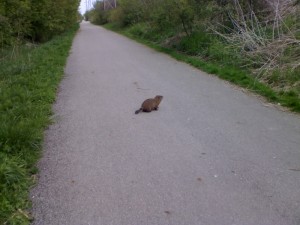 I saw this pudgy little fellow on the Beltline west of the Dufferin Street pedestrian bridge today on my bike ride.

Gosh! I love spring!!! Later on I saw a man walking his bunny in the park. Life is good!

I really wish I’d brought a better camera with me on my bike ride. I took the picture with my cellphone so that explains the general lousiness of the photo. The screen is so tiny I couldn’t figure out if I took a decent picture of the groundhog, or not.

It’s a “not”, isn’t it? I better juice up the rechargeable batteries in my point and shoot camera RIGHT NOW.

It’s a quiet ride. The trail starts at the end of the Beltline Trail, south of Eglinton West station and meanders through parks and playing fields until it reaches the rear of St. Clair West station at Heath Street. Just think, approximately 30 years ago the city planned on carving up all of the neighbourhoods south of the Allen Expressway into downtown Toronto. We almost lost these homes, parks, and trails to a highway. 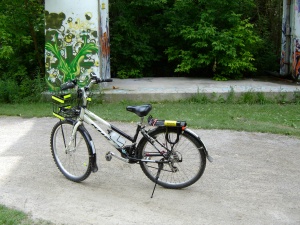 If I am feeling adventurous I will continue to Wells Hill Avenue and St. Clair where the trail continues south east through Sir Winston Churchill Park. This leg is a bit tricky since the trail is narrow, steep and rutted for the first 100 metres or so. Once that part clears the path takes you under Spadina road and the trail changes from gravel to dirt to a weird concrete lattice to sand then back to gravel. The sand and gravel makes the ride soft and sludgy because it likes to grab your wheels and turn you about. The best thing to do is spin in an easy gear and be brave. 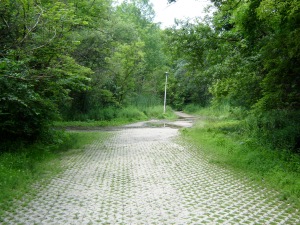 Follow the trail up and then right and then down though the Roycroft Park Marshes. There are sunny hills, park benches, and shady woods right up till the exit at Boulton Drive.

Boulton Drive has it’s own bike lane and goes down hill all the way to Davenport and Dupont Roads.

A totally fun ride that is hidden in the parks under Toronto’s busiest roads.

Next trip: The Toronto Islands!

"I'm on the Chocolate Diet"
- Brown t-shirt, Yonge and Broadway

"Meat is Murder.
Tasty, Tasty Murder."
- Printed on a pink t-shirt worn by a man today in downtown Toronto, King and Spadina.

What? Don't believe me?
Too bad! Unicorns Rule!